“The Curious Case of Switzerland's Languages”

I’ve been lucky to get around in this world a little bit over the years and had the chance (and still do!) to meet people from numerous different backgrounds. Generally, when I tell people I’m from Switzerland they think of mountains, cheese, chocolate, and hiss at the insanely high prices. Often, I get asked: “Actually, what is your native language?” Well, there is a short answer and a long answer. This article is the extended version of the long answer to that question — it’s complicated.

So, do you speak German?

Yes, I do speak German fluently but it is not my native language. To tackle the question, it helps to look at the geography of Switzerland in the context of its neighboring countries. 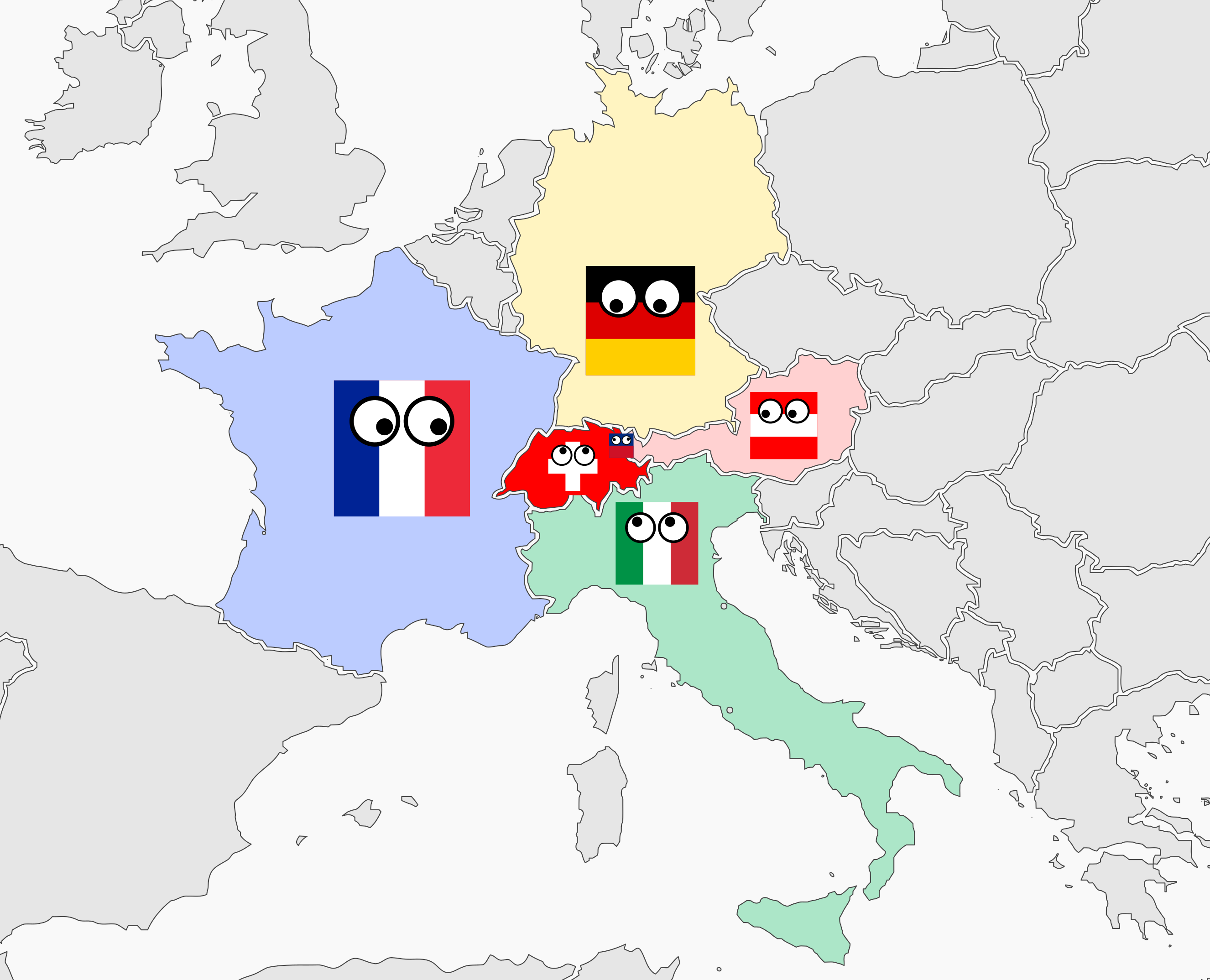 Given the fact that Switzerland is located in the heart of Europe (yet is not part of the European Union), squished between five culturally diverse countries, four of which have been major superpowers at some point in time, it is clear that those nations and their languages exercised a certain level of linguistic influence. This becomes clear when we compare the previous map with a map of spoken languages: 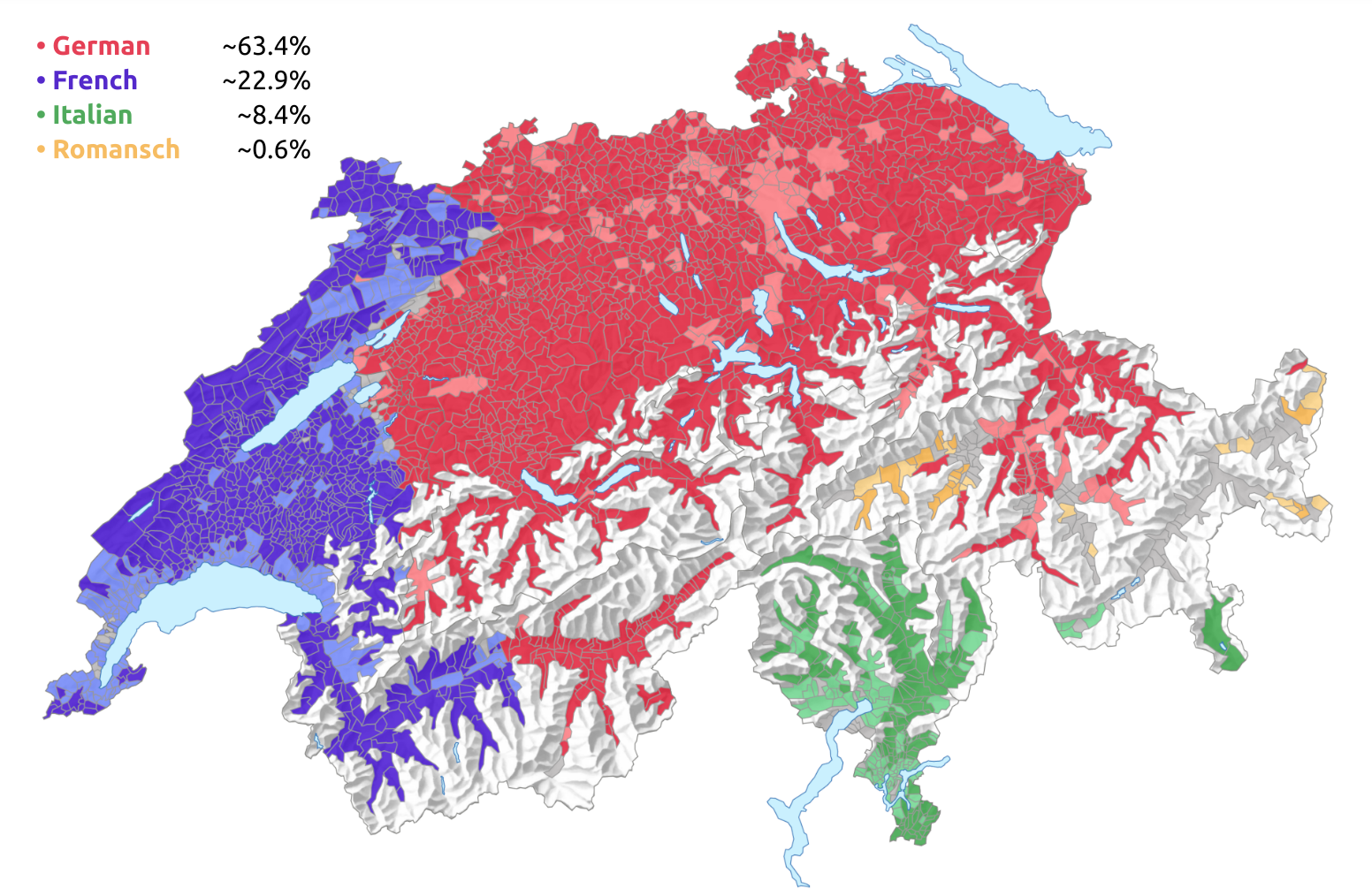 As you will be able to tell from the image above, the most widely spoken language is German (~63.4%), followed by French (~22.9%), Italian (~8.4%), and Romansch (~0.6%). These are the four national languages. Yes, Switzerland does not only have 26 largely autonomous states (called ‘cantons’) crammed into a tiny area, it also has an extremely diverse linguistical landscape.

Bonus Fact: To not prefer one national language over another, Switzerland's official name is kept in Latin, 'Confoederatio Helvetica'.

Romansch is a weird one you might not have heard of until now. Related to Latin, it is a remnant of the Roman Empire and is, unfortunately, a dying language despite all efforts to standardize and promote it, spoken by only a handful of people in the south-eastern part of Switzerland.

Myself, I was born and grew up in the north-eastern part of the country in a town near Zurich, which lies in the German-speaking part of Switzerland (colored in red above). However, the term ‘German-speaking part’ is a rather misleading description and we’ll have to go down the rabbit hole a little deeper to figure this out.

Just like it is the case with English, German is a pluricentric language with different standard definitions. So technically, the ‘official’ language of the German-speaking part of Switzerland is Swiss Standard German (not to be confused with Swiss German). It is largely identical to German Standard German, with a few minor differences in vocabulary and spelling. For example, certain words that are commonly used are actually derived from French or Italian, and not German (

Germans also typographically differentiate between sharply and softly pronounced double-S using the special letter ß for the sharp-S (called Eszett — not to be confused with the Greek Beta β). For example, ‘Maße’ (mass) and ‘Masse’ (measurements). In Switzerland, this letter does not exist and words are always written with ‘ss’ regardless of pronunciation, which has to be inferred from context.

No. Even though Swiss Standard German is the official language, it is not actually spoken by anyone. Instead, it is used exclusively for written communication and for situations with a broader audience to reduce misunderstandings, such as news broadcasts or political speeches. Speaking from personal experience and based on the opinion of literally every Swiss person I ever met, nobody likes speaking Standard German and people prefer to talk in their local dialects instead.

Alright, so even though Swiss Standard German is the ‘official language of government administration’, it is a purely written language and not actually used by Swiss people for everyday conversations. Instead, people speak in their distinct local dialects which are consolidated under the umbrella term Schweizerdeutsch (Swiss German). However, Swiss German is often not considered to be a dialect but a separate language entirely with its own vocabulary and grammar. Also, Swiss German and German are largely not mutually intelligible, meaning German speakers will generally be unable to understand Swiss German without studying it first. Confused yet? The article on Wikipedia on Swiss German in Swiss German might shed some light on the matter (or not

is a square and one of only three country flags that are non-rectangular.

Interestingly, Swiss German is not considered inferior to Standard German by any stretch of the imagination, which is often the case in other countries. Instead, Swiss German dialects are used for all aspects of life no matter how formal the situation is and regardless of a person’s status in society.

With so many different languages in such a small corner of the world, does that mean that all Swiss people are quadrilingual? No, unfortunately that is not the case. Generally, we speak the language of the region in which we grew up and learn another national language in school. Myself, I grew up speaking Swiss German and then started learning Standard German in school from first grade onward. Additionally, I was taught French as the second national language from fifth grade and English from seventh grade. Swiss people growing up in other regions of the country generally learn Standard German as a second national language. Nowadays, English is taught much earlier starting from third grade.

Whether this is a good or bad idea from a pedagogical perspective is a topic for debate. Personally, I found it rather difficult having to juggle four different languages growing up (Swiss German, German, French, and English).

Bonus Fact: Occasionally, Swiss German speakers will switch to German mid-sentence to make a point, using German as a "linguistic highlighter". This is an example of code-switching.

A common follow-up question after resolving the language issue (if they are still awake) is an inquiry regarding my hometown — and, you guessed it — it’s also not straightforward to answer.

Generally, people want to know where I grew up. In Switzerland, however, one’s hometown is hereditary, meaning your right to citizenship (‘Bürgerrecht’) of that place gets passed down from father to child. For example, my hometown is a small village in the south-east, where a specific dialect of Italian is spoken. It is a beautiful place and I have been there a few times, but it is not where I was born and I do not even speak the language. Instead, it is the municipality where my father’s father’s father grew up. The ‘hometown’ is often used for identity verification but people rarely have a personal connection with it.

Switzerland has got four national languages, German, French, Italian, and Romansch, of which the first three serve as official languages for interactions with the government. The official language in the German-speaking part of Switzerland is called Swiss Standard German and is highly similar to regular German. However, it is used almost exclusively for writing. Swiss German is used for speaking instead, and is considered a distinct language. While Swiss people from the German-speaking region are all able to communicate in regular German fluently, they often dislike doing so and strongly prefer speaking in Swiss German. Native speakers of German find it difficult or impossible to understand Swiss German without studying the language. There are also differences between the individual dialects of Swiss German, making communication between Swiss people from different regions not always easy. TL;DR² it’s complicated.